One of Victoria’s most sought after and prized fish, the snapper, is found in almost all of Victoria’s saltwater environments from the deep waters off the port of Portland (120m), to the shallow inlets and bays – including captures in less than 1m of water in the man-made waters of Lakers Cutting, Point Lonsdale.

Some schools of snapper can be located all year round somewhere in Victoria, with very large fish sought in Corio Bay and off the Port of Melbourne in the cold depths of winter. Prolific pinky-sized fish are almost a nuisance on the reefs of Victoria throughout Spring, Summer and Autumn, but large fish are always a chance wherever pinky-sized fish roam.

In Queenscliff the first snapper are usually caught in late August, though are few and far between. As the water warms up during late September, the schools which have been congregating in the waters of Bass Strait start their annual pilgrimage into Port Phillip Bay. By mid October it’s on for the snapper fishermen, and in Queenscliff this run extends until late December when the larger fish are thought to be congregating for spawning in the deeper regions of Port Phillip Bay.

Another run occurs at Queenscliff for larger fish (5kg+) during April and May as the spawners make their way out of the bay, and the offshore reefs of Bass Strait can fish very well at this time of year.

Techniques used for snapper fishing aboard Gone Fishing Charters are variable depending on locations. In Port Phillip Bay, long leaders (1.5m), size 4/0 hooks, and sinkers that vary from 4-12oz depending on tidal strength and location are the norm. For offshore work a twisted dropper rig with 4/0 hooks and 6-8oz leads are used.

Baits are always fresh caught squid, salmon or barracouta, or a combination of the above. Our crew always bait your hooks for a maximum effective presentation and are always obliging if you want to learn to do it yourself. Baits for snapper are never just ‘good enough’ and with a little effort results will follow.

At Gone Fishing Charters we recommend and use 12kg Ugly Stik rods coupled with 7500 and 8500 Penn Spinfishers loaded with 24kg Millenium braid from Platyl. Some people would argue that this is heavy gear and snapper can be caught on cobweb, but as a charter boat where captured fish are of utmost importance this is the gear to use. For throwing 12oz leads, nothing can compare and if that Mako or Thresher Shark takes a liking to your snapper bait you are still in with a good chance. 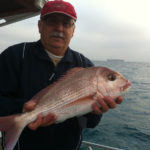 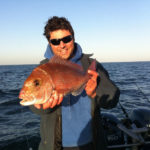 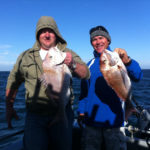 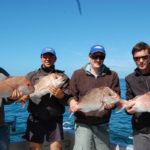 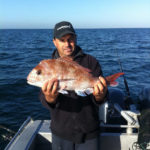 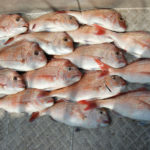 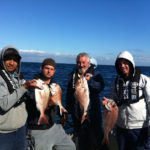