Australian Salmon are a prolific schooling fish in the southern parts of Port Phillip Bay and coastal areas of Bass Strait. From mid August until late May Salmon can be found almost everyday on our regular hunts by trolling, and during the winter months bait fishing close to the surf can produce results with the best baits being pilchard or white bait and the use of a burley trail. The most commonly used method to catch these hard fighting and exiting fish is trolling.

A spread of four or more lures is set behind the boat and trolled at 4.5 knots. Many types of lures work on Salmon, from hard bodied bibbed minnow type lures to the ever reliable rubber ‘occy’ type skirts with tinsel inserts. Some anglers troll slug type lures such as Lazers, but for trolling these tend to twist the line more frequently and this costs anglers time when untangling. Lures should be set close to the boat (max 15m) and all lures running at the same length, which helps represent a school of bait fish and thus increases the likelihood of multiple hook ups. With multiple hook ups the norm rather than the exception, Salmon fishing can be fast and frantic and with fish as big as 4kg. Many anglers see this as the ultimate in light tackle sport fishing in Port Phillip Bay.

The Australian Salmon is also the number one prime species if you want to tackle ‘Saltwater Fly Fishing’. Whether it be drifting close to boiling schools or trolling teasers for deep fish, Australian Salmon are a real buzz on fly gear and the perfect introductory species for the budding fly fisherman. Many people disregard these fish for eating but when bled and cleaned correctly they are very nice indeed. 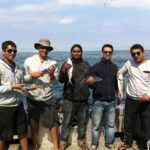 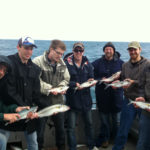 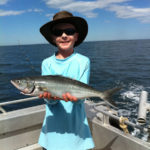 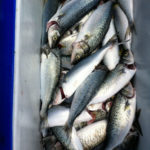 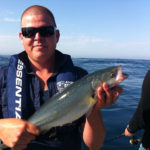